After receiving a bye to the Semi-Finals of the 2012 edition, Corinthians beat Egypt’s Al Ahly 1-0 in a closely contest semi-final, with a 30th minute Paolo Guerrero goal being the difference maker. In the final they met Chelsea who had a relatively more comfortable contest in a 3-1 victory against Monterrey. In the final Guerrero was again to be the difference maker, reaching hero status among the Corinthians faithful and stunning Chelsea to claim their second Club World Cup title. Here we look at the people involved in that historic result.
2012 Club World Cup Final Highlights

Tite was appointed head coach of the Brazil national team in June 2016 following a decorated career in club management in Brazil. Success would come in two spells for Tite, winning the Copa Sudamericana in 2008 with Internacional, making a brief stop in the U.A.E before taking charge of Corinthians, bringing success to the club. Following failure to repeat the success in 2013, Tite took a year away from the game to focus on tactical study, before returning to Corinthians in 2015, once again winning the league title, before taking the Brazil national team job in 2016.

Goal scoring hero of Corinthians success, Guerrero had much top level European experience, being a youth product of Bayern Munich and being part of the first team squad for 2 years, followed by a six year stint with Hamburg scoring 37 goals in 134 appearances. He moved to Corinthians in 2012 with Club World Cup success added by a Recopa-Sul Americana win the following year. After failed contract negotiations, Guerrero moved to Flamengo in the Summer of 2015 where he continues to play, along with appearances for the Peruvian national team for whom since debut in 2004, he has 28 goals in 78 appearances.

Possibly the biggest star to emerge from the victorious side, Paulinho currently plays in China for Guangzhou Evergrande following a €15 million transfer from Tottenham Hotspur in the Summer of 2015. Following early European experience with FC Vilnius and ŁKS Łódź, a return to Brazil re-ignited Paulinho’s career. Moving to Corinthians in 2010, his accomplished play and success on the global stage attracted the attention of the Brazilian national side, and also Tottenham Hotspur who signed him for a fee of €20 million. Despite occasional fine performances, he failed to establish himself as a first team regular and in 2015 moved to China. However his international career was highlighted by winning the Bronze Ball award at the 2013 Confederations Cup behind Neymar and Andrés Iniesta, as Brazil went on to win on home soil. 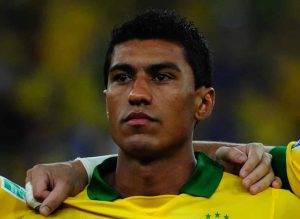 Often described as one of the greatest Brazilians to never appear for the National side, Danilo was a relative veteran at 33 for Corinthians success. His technical exploits earned him the nickname ‘ZiDanilo’ due to comparisons with the style of play of Zinedine Zidane. Beginning his career at Goiás, he move to play for Sao Paolo with tremendous success, winning the league, Libertadores and Club World Cup trophies with the side. From there he earned a move to Japan with Kashima Antlers, winning three consecutive J-League titles before moving back to Brazil with Corintians were he still plays today.

A player noted for his impressive dibbling and ball control skills, though often a frustrating player also. This caused a succession of loan moves early in his career before a move to Botafogo in 2007 gave him a platform to display his talents, with his fine form resulting in a move to Corinthians in 2009. However with moves to Internacional in 2013 and Vasco de Gama in 2015, the now 34 year old is showing signs of slowing, though still remains a dynamic threat on the ball.

Now at the end of his career, Emerson has had a remarkably well traveled career with stops in Japan, U.A.E, France and Qatar for whom he was nationalized has has three caps to his name. He has been successful in his travels being player of the year in Japan in 2003, top scorer in 2004 and also player of the year in Qatar in 2006, along with cup success in Japan and the U.A.E. However he had a remarkable run of success in Brazil with three consecutive league titles with three different clubs, Flamengo (2009), Fluminese (2010) and Corinthians in 2011 capped with Club World Cup success in 2012. Making a brief switch to Botofogo in 2014, he returned to Corinthians in 2015 before finally switching back to Flamengo.

Ralf is another player from this list currently plying his trade in China, on the books at Beijing Guoan. Moving between smaller Brazilian clubs early in his career a move to Barueri, and helping them to their first season in Serie A caught the attention of Corinthians, signing him in 2010 for a 5 year stint at the club. His success with Corinthians (including being in the league team of the year in 2011) allowed him to earn 8 caps for Brazil under Manolo Menezes. Following another league success with Corinthians in 2015, Ralf decided to make the switch and play his football in China for the foreseeable future.

Though being a Sao Paolo player from 2003-2008, his early career was dotted with many loan moves including to Japan with Kashima Antlers (2006) and to Europe with Monaco in 2008. Finally earning more regular football with Grêmio following a 2009 move, he was picked up by Corinthians in 2011 as cover for Roberto Carlos. However with his subsequent move to Russia, Fábio Santos became a key first team player playing 116 times for Corinthians between 2011-2015. Despite a promising move to Mexico with Cruz Azul in 2015, a lack of game time in his second season there saw him return to Brazil with current club Atlético Mineiro. Another to benefit from Corinthians success, Fábio Santos earned three Brazil caps in 2012, whilst after a four year gap, recent good form has seen him recalled to the national team for the world cup qualifier against Peru in November 2016 under his former Corinthians coach “Tite”.

Currently on loan at Atlético Paranaense from Cruzeiro, Paulo André was yet another to make a move to China following success with Corinthians in 2014, moving to Shanghai Shenhua. However he had precious experience abroad, moving from Atlético Paranaense to French side Le Mans in 2006. However he spent the last of these years on loan with Corinthians, impressing to earn a permanent move back to Brazil to enjoy first team football. He was included in the league’s 2011 team of the year, alongside club-mate Paulinho, Neymar and Ronaldinho. Following a relatively unsuccessful time in China, he is now back playing in Brazil.

A player who was with Corinthians throughout their return to glory, he signed in 2008, helping them return to the Brazilian top flight. A move to Flamengo added a second Brazilian Cup to his trophy collection. Following a brief move to the Indian Super League with the Dehli Dynamos in 2015, Chicão decided to retire from the game, feeling that he was no longer physically able to play at the required level. However he harbors hopes of returning to Corinthians, perhaps in a coaching role with the club where he had his greatest success.

Veteran of the 2012 winning team, Alessandro began his career with Flamengo, winning a Brazilian Cup in 2001. He attracted the attention of clubs in Europe, including Dynamo Kiev who signed him in 2003 for an ill fated move. Struggling to adapt and break into the first team, her returned to Brazil for loan spells with Cruzeiro and Grêmio. Finally being transferred to Santos in 2007, he then switched to Corinthians where he would stay until the end of his career in 2013.

Goalkeeper in the final, Cássio had moved to Europe as a twenty-two year old in 2007 to sign for PSV Eindhoven, though would only play mostly in the reserve, save for three first team appearances. He moved to Corinthians in 2012 and proved pivotal in their Club World Cup success, being named player of the tournament ahead of Chelsea player and compatriot David Luiz. He has remained at Corinthians, adding a 2015 league title to the success of 2012/2013.

Though the success of this side was a landmark achievement for Brazilian, South American and generally non-European football, fears grow for the gulf between teams in intercontinental competition as this gap in quality seems to. the efforts of Kashima Antlers give teams around the world hope moving into the future, whilst all can point to the success of the 2012 Corinthians side as proof of what can be achieved, as their legacy lives on for all to follow.